LIMITED EDITION SCULPT: Available now for the first time as a limited edition sculpt, this version of Rage can be used to represent either Rage, or Veteran Rage out on the pitch. Bloody coin in hand, and still clutching Blackheart’s sword, this is one of the most iconic models we’ve ever produced, so don’t miss out!

This model may Charge without spending Influence. Edit

This model gains [+1] TAC when making an Attack against models of the named guild. Edit

The first time this model is damaged by an enemy model each turn, the friendly team gains [2] MP. Edit

Target friendly Guild model within [4"] gains [+1] TAC and [+1] DMG to Playbook damage results when making an Attack against as enemy model that is engaged by one or more other friendly models. Edit

While within this aura friendly models gain [+1] TAC and [+1] DMG to Playbook damage results when making an Attack against an enemy model that is engaged by one or more other friendly models. My Gang is not cumulative with Bloody Coin. Edit 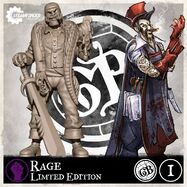 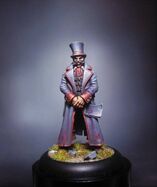 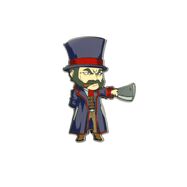 Chibi Pin
Add a photo to this gallery
Retrieved from "https://guild-ball.fandom.com/wiki/Veteran_Rage?oldid=4747"
Community content is available under CC-BY-SA unless otherwise noted.