A standout player among the cutthroats of the Union, Brisket is a captain to be reckoned with. Despite being at odds with her team’s ruthless villainy, she can always rally her team, pushing them to achieve epic feats of teamwork and dominate the scoreboard. Easily the most gifted striker to play for the Union, her motives remain a compelling mystery.

Target enemy model that is in possession of the ball-marker. This model makes a Jog directly towards this model. Edit

The next time this model scores a goal, the friendly team gains [+1] additional VP. Edit

Goal of the Month

When this model scores a goal, after rolling the TN test, if [2] or more successful dice show the same result, then the goal is a Screamer!. Edit

When this model makes a Shot during its activation, the TN is reduced by [-1]. Edit

Once per turn, when an enemy model ends an Advance in this model's melee zone, this model may immediately make a [2"] Dodge. Edit 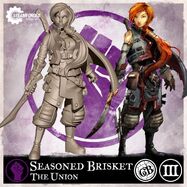 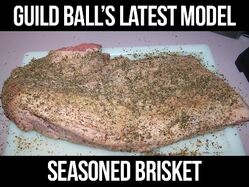 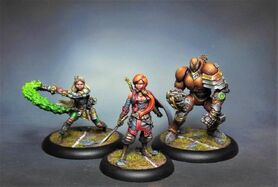 by Dark Iron Studio
Add a photo to this gallery
Retrieved from "https://guild-ball.fandom.com/wiki/Seasoned_Brisket?oldid=5094"
Community content is available under CC-BY-SA unless otherwise noted.