Alchemists’ play style is one of force projection. They utilize a lot of AOE to control space and deny their opponents maneuverability. Their combo play comes from layering AOEs and generating huge areas of danger across the pitch.

They are quick on their feet and capable with the ball, but not as resilient in combat as other teams. They excel in the early to mid-game due to their ability to cover a good amount of space.

Alchemists will reward players who can anticipate their opponent’s plans and block them through good placement and positioning of models and effects. On offense, Alchemists can use their AOEs almost as additional models in order to restrict the counter play options of their opponent. No one wants to charge the Alchemist with the ball if you have to go through an acid cloud! 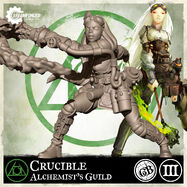 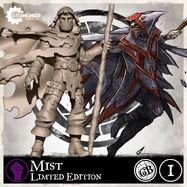 by Dark Iron Studio
Add a photo to this gallery
Retrieved from "https://guild-ball.fandom.com/wiki/Alchemists?oldid=4529"
Community content is available under CC-BY-SA unless otherwise noted.